Aconcagua – Looking Back Over Two Decades of Climbing the Mountain

As guides, we often have opportunities to go to remarkable places around the globe. It’s hard to pick real favorite trips, but whenever I think about trips that are generally just plain fun and enjoyable, I tend to think of Aconcagua.

My first time up the mountain was in 1996, when my mentor on Denali, Scott Woolums, asked me to lead a team of climbers up the mountain.  My Spanish language skills were pretty good, as I’d studied and traveled a lot in South America.  I packed the trip at Scott’s Hood River, Oregon house and flew down to Mendoza with a half dozen huge duffel bags stuffed with food and gear.  There was no good map available at the time, but Scott had shown me loads of slides (remember slide film!), and had drawn me some maps illustrating where I should probably be able to find water at each camp.  My team and I climbed a pretty remote route that has since been closed by the Provincial Park Service that we called the Upper Vacas Route.  It followed the Vacas Valley approach for two days before departing the trail of the False Polish Route climbers and continued up the Vacas Valley, traversing some pretty sketchy hillsides above monstrous, rapidly eroding river banks until it deposited us near the Gussfeldt Glacier on the north side of the mountain.

Reflecting back, maybe that first trip wasn’t so “fun,” but it was sure an adventure!  Scott had scuffed in a bit of a trail over his previous couple of trips, but not too many other people had been up that side of the mountain in 1996.  I was able to follow much of Scott’s trail, but it really felt like we were headed into the unknown and for us — we were! 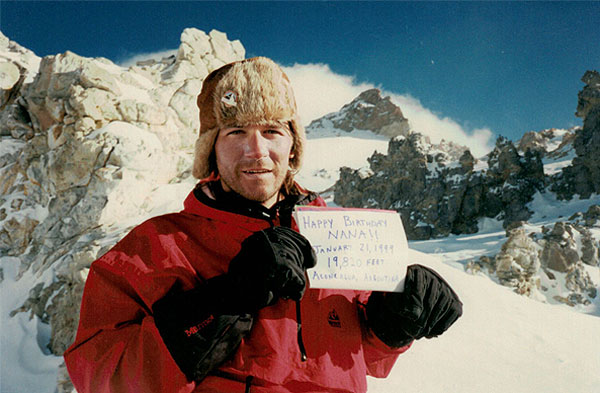 I’ve made numerous trips back in the intervening 20 years and have seen many changes to how people climb the mountain and how we guide it.  Most of the changes are for the better:  the mountain is much cleaner now than it used to be, thanks to rigorous enforcement of human waste disposal by Park officials and a general “buy in” of Leave No Trace ethics by most locals and visitors.  Communications have improved tremendously and I can now call or text my kids from literally anywhere on the mountain.  The old Upper Vacas Valley route is part of a strict conservation protection area, so we adapted the False Polish Route in a manner than both helped disperse the number of climbers following it and also enabled us to craft a route that affords better acclimatization.

So why does Aconcagua stand out as one of my most enjoyable trips?  It’s not that it is super exotic — Carstensz Pyramid probably wins in that category with it’s opportunities for surfing in Bali, jungle travel, and local Dani tribesmen wearing only feathered headdresses and penis gourds.  It’s not the most wild — that title has to go to Mount Vinson, where the wild remoteness is palatable and ever-present.  I’d have to say that it is just the whole package that brings Aconcagua to mind as a genuinely fun trip.

It is a very accessible peak both financially and technically.  I have climbed it with Seven Summit climbers, technically proficient “hardmen,” and close-to-retiring school teachers.  It can be deadly serious, but conditions are generally pretty all right.  I’ve been as cold on Aconcagua as anywhere on the planet, but normally, temperatures are fairly moderate and we now ofter only don our mountaineering boots for the very upper mountain.  The systems we have devised to provide support to our climbers don’t necessarily lessen the work necessary to make the ascent, but they sure do lighten the pack weights, which adds a ton to the enjoyment factor.

Most climbers ascend the “Ruta Normal” from the bustling Plaza de Mulas base camp on the west side of the mountain.  I suspect that is why the peak has a reputation as “Acon-slog-wa,” a play on words reference to the mind-numbing repetition of the route on that side of the mountain.  Honestly, I’ve never climbed up that side, but I guess I can see why, if you have only experienced that route, you might feel it is a bit of a slog.  I often refer to the Normal Route as three of God’s biggest scree fields stacked one atop the other.  The views change a bit, as you climb higher and can see a bit further, but you’re basically looking at the same peaks from different elevations as you climb.

The route we follow is very different.  It follows a series of hanging valleys, each one almost perpendicular to the previous, so your views not only expand, they change, from looking due east to peering out to the north east and culminating with broad views to the north and west, as we corkscrew our way up the mountain.  Dropping down the Ruta Normal makes a ton of sense to me, as it is a quick descent down to civilization and leaves you with just a one-day hike out the Horcones Valley, which has a very different feel to it than does the Vacas, up which you hiked a couple of weeks earlier.

The trip starts and ends in Mendoza, which is a truly lovely little city, with many verdant parks in which to stroll of an evening, sidewalk cafes at which to sip an espresso or frosty bottle of Andes, and warm, friendly residents with whom I’ve developed many friendships over the years.  Oh yeah — Mendoza is also the heart of the world renowned Argentine wine country, which is a nice bonus!

If you are a fit hiker or an intrepid mountaineer, I’d really recommend that you consider an Aconcagua climb.  It offers something for everyone in a venue that is generally pretty reasonable, but can definitely give you a full-value, big mountain experience.

After researching options, we are beginning to offer “Quick Ascents” of Aconcagua, which shave almost a week off our normal itinerary.  These involve additional commitment to acclimatizing beforehand and have some additional expenses, but if you are looking to climb the mountain and just can’t manage three weeks away from work and home, this might be a really good option. 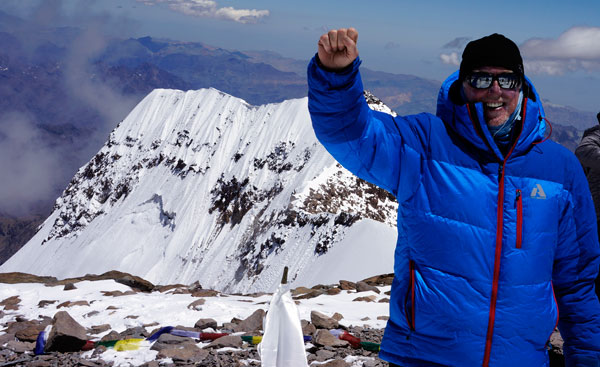