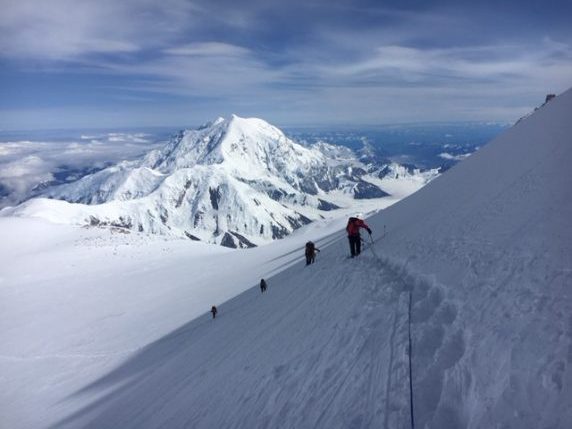 Denali 2017 Season Wrap-Up:  A look back at a tough season in the Alaska Range

Weather is always the dominant force and topic of discussion on Denali.  The fickle whims of the weather generally determine who will get an opportunity to climb high on the mountain. This season was a particularly challenging season weather wise with a couple of very short windows of weather to move high on the mountain, very cold temps through the month of May, and very challenging glacier conditions on the lower mountain as early as mid-June. 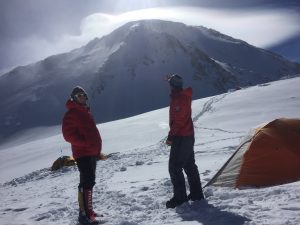 The numbers tell part of the tale. The NPS recorded 1189 Denali climbers this season, of which 495 reached the summit. This puts 2017 as the second lowest year for summits in memory, with just 42% of climbers standing on top. In 2014, only 35% of climbers had that view, but this season was… different. The vast majority of these summits occurred during three very short lived windows of weather the first day or two of June, one day mid-June, and a two day window June 20-21.

Climbers who ventured into the Alaska Range in April of this season found generally mild conditions. It just wasn’t that cold, but May was a remarkably cold month throughout the Alaska Range.  Denali climbers don’t generally attempt the mountain in April due to the typically cold temps and shorter days, but this season April might have been a good choice… 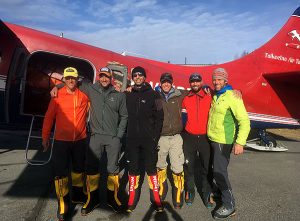 Our first team of the season flew to the Kahiltna base camp on May 1st, kicking off a season with 21 separate expeditions heading up Denali including expeditions.  19 of these expeditions were attempting the West Buttress Route, one was headed to the West Rib, and one to the seldom guided Cassin Ridge.  Of these expeditions, 8 teams made it to the summit.  As we look through the numbers and analyze the season, there were only 3 very short (1-2 day) windows of weather that reasonably allowed teams to move high on the mountain.  Our teams that were in place took advantage of these windows and got to the top, but due to the distribution of trips across the season, many teams never saw one of these weather windows.

As we rolled into May and began the season, our guides reported consistent -30F temperature at 14,200’ right up until the very last days of the month. Typically, we’ll see a few such nights at that elevation, but when the sun comes out, the temperature will usually rise and climbers will shed layers and seek shelter from the warmth of the sun. Not this season. Guides called in from 14 Camp, wearing every stitch of clothing and they did not want to make small talk, as they just wanted to duck into their sleeping bags (with most, if not all their clothes still on!). While we are not ones to make generalizations, the consensus from our guides and from NPS staff at 14 Camp was that literally, every climber that came down from the 17,200’ High Camp in May had some degree of cold injury. Our guides helped some serious frostbite victims during this time period.

Finally, on May 30th, the first guided parties of the season pushed up to High Camp and took advantage of the first good summit days of the season on May 31st and June 1st.  Guides want to summit. They know the mountain and they try very, very hard to reach the top, and we can’t remember when the first teams didn’t head to high camp until the 30th of May.

On the 31st of May and 1st day of June the first big push of guided teams, including two 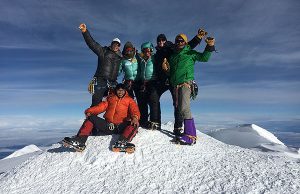 Mountain Trip teams, reached the summit. By the end of June 2nd, 123 climbers had reached the top of North America. Then… the weather shut down for another week. But this time, when the upper mountain shut down, the temperatures on the lower mountain warmed, and warmed a lot. It was as if a light switch had been flipped and the Kahiltna Glacier, the approach for the West Buttress and most southern routes had gone from winter conditions to late, late season. There were many nights during which the lower glacier did not freeze (more on that in a bit!).

If we can make any generalization about the weather in 2017, it is that we did not see any long-duration high pressure systems settle over the mountain. We saw a somewhat unsettled system try to take hold the third week of June, but it was not a strong one. In comparison, most seasons see 2-3 or more week-long high pressure systems set up over the mountain. That just didn’t happen in May or June of 2017. 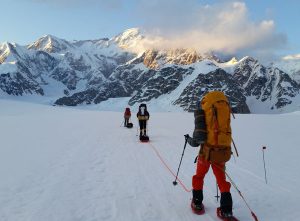 Due to low snowfall in the Alaska Range over the winter, snow bridges were thin and when temps started to warm up in early June, the glacier became tricky quickly.

When the “light switch” flipped, and temperatures on the lower Kahiltna Glacier did not consistently drop below freezing, the supportive layers in the snowpack began to melt, weaken, and grow increasingly thinner.  Crevasses began to open and climbers began to find them – often with frightening quickness. 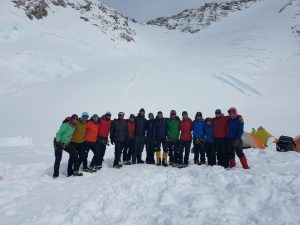 Mountain Trip guides were involved in several rescues this season including two separate incidents of un-roped climbers on private teams falling into crevasses. One of these private un-roped climbers spent nearly 15 hours solidly wedged into a crevasse before being pulled out with severe hypothermia, but alive.   We are once again very proud of our guide teams and the almost endless numbers of rescues, and sometimes just helping prevent rescues that they get involved with on Denali each year. Several of our guides were once again awarded with the Denali Pro Pins by the National Park Service in recognition for their help on the mountain.

Throughout the month of June, our teams were traveling almost exclusively at night on the lower glacier (below the 11,000 ft camp) to avoid the warmest time of day.  Even traveling at night, many teams found an unfrozen snow surface and quite challenging conditions.  Our last team of the season made their way through the minefield of crevasses to Base Camp by the 7th of June, closing out our season on Denali.

By the very end of the season, July 14th, which is actually a full week earlier than many years, a guided party (from another guide service) found conditions so precarious on that their lead guide fell in a crevasse and sustained a shoulder injury. The National Park Service actually flew all the climbers over the lower Kahiltna Glacier in a helicopter, because it was such a broken minefield of cracks that the NPS felt this was the best option for getting the last climbers of the season off the mountain.

We really want to say a big Thanks! to all the climbers who trusted Mountain Trip and joined us on expedition in the Alaska Range this season.  While it was certainly a challenging season with lots of difficult weather, we received a ton of positive feedback from our guests.  It is easy to say “it’s not about the summit, but about the journey,” but this year most climbers really took that to heart and found that they had a challenging and meaningful experience, even if they didn’t stand on the top of the mountain.   We hope to see you up on a big mountain again! 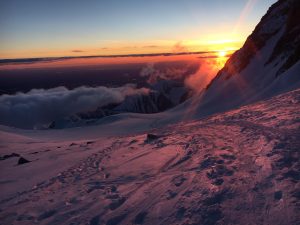 Three days ago, I flew around the Alaska Range, showing my 11-year old son the “office” in which I have worked for the past 23 years. To say I barely recognized it would be an overstatement, but to categorically say that I’ve never seen it looking like it did this weekend, would not be much of a stretch. Our plane landed on the upper Eldridge Glacier, and while my son ran amok and showed us his best impersonation of a penguin sliding on the sun-cupped, snow of summer, Paul Roderick, the owner of Talkeetna Air Taxi, and I chatted about the crazy conditions of the 2017 climbing season.

The quantity of crevasses that punctuated the Kahiltna Glacier at the confluence with the Southeast Fork, home of Denali Base Camp, was staggering.  The route north past the East Fork of the Kahiltna was crisscrossed with cracks all the way to Camp 1 at 7,800′.  Fittingly, while Paul and I discussed the mild early season and the bitterly frigid month of May, which changed seemingly overnight to late-season condition in early June (!!), thunder rolled from dark clouds behind the ridge to our south, and Paul commented, “Listen to that – we never had to deal with lightning 30 years ago!”  We concurred that this season had been a very different one.