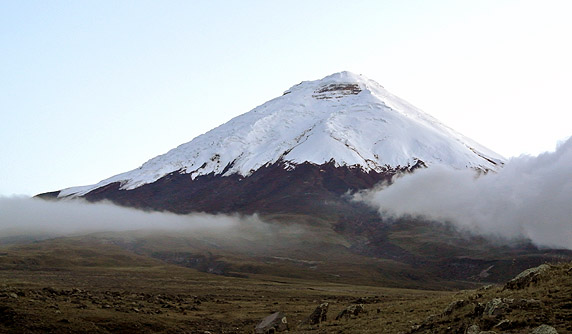 It’s nice to have arrived home to some snow!  While there was snow up high when I left, the lower elevations and most south faces were pretty darn dry.  Now it feels like winter, and makes the temperate climate of Ecuador seem all the more appealing.

The trip I helped out with had been organized as a private climb for a group of friends by Nate Disser at Southwest Adventure Guides.  Nate is a longtime friend who has worked for us in Alaska and we have collaborated on many levels in recent years.  Some of his clients were interested in coming up to Alaska, and Nate knew that I’ve spent a lot of time in Ecuador over the years, so he invited me to join his team.  Delays at the start were largely mitigated by being flexible with our itinerary, and the team came away feeling fortunate to have packed so much adventure into a short, 10-day trip.

We stayed in very nice “haciendas” and “hosterias” while acclimatizing before our climbs and we snuck in a well-deserved trip to the lush vacation hotspot of Banos, located on the cusp of the Andes, just above the vast Amazon basin.  Our timing was remarkable, because our two summit days for the big volcanoes were perfect, bluebird days, while we saw clouds, rain and snow on many of our non-climbing days.  “Lucky Lindy,” one of our team members, claims responsibility for this!

After arriving, we did a couple of acclimatization hikes, including one up an old volcanic caldera named after the Incan general who famously fought Pizarro’s men when the Spaniards arrived, Ruminahui.  Ruminahui is a Quechua term meaning “rumi” – stone and “navi” – face.  I’m not sure I’d name my little baby boy “Stoneface,” but it was a different culture in those days…

After climbing Ruminahui, we took the next day to climb up to the Jose Ribas hut on the flank of Cotopaxi, from where we based to practice some snow and glacier skills above the hut.  The climb up to the hut took about 45 minutes, and we climbed up another 30 to access a suitable snowfield for a skills review. After enduring blowing snow and rain, we descended to the luxurious comfort of the Chilcabamba lodge on the outskirts of the Park. 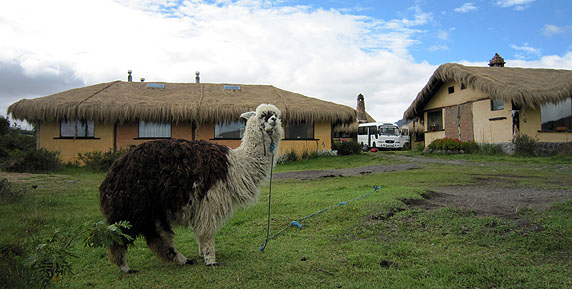 The guard llama at Hosteria Chilcabamaba

The next day was summit day, and we headed back up to the Jose Ribas Refugio.  Arriving after lunch, we got ourselves comfortable in the lower sleeping area, which we had arranged to have all to ourselves.  This helped somewhat, but pre-climb excitement kept most team members from sleeping too much after our delicious, early dinner of chicken and pasta.  Cotopaxi requires a pre-dawn start, so we were all hiking by midnight, ascending the majority of the route by headlamp. 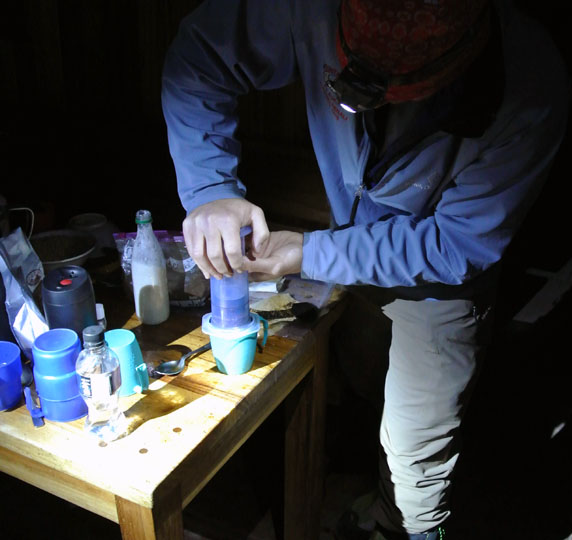 Anyone who knows me understands my... affinity for good coffee. OK-OK, maybe it's an addiction, but the Aeropress espresso maker is generally with me on expeditions. 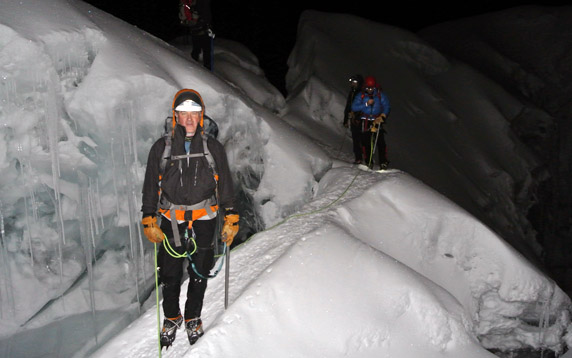 Lucky Lindy in the thick of the crevassed stretch on our ascent.

Conditions on Cotopaxi were great for climbing, with a little new snow, which made for easy cramponing, however; we were all somewhat surprised at how much the route had changed in the years since we had last been on it.  Historically, the “normal” route on Cotopaxi was a glacier hike, with a few crevasses to negotiate, ending in a 40 degree slope to the top.  Glacial movement, and serac formation have changed the route to one with fairly tricky route-finding and some elevated crevasse and serac hazards, that required a cool-head and quick feet to negotiate.  The end result was a really fun and enjoyable climb that kept us guides on our toes, as we employed a variety of techniques to keep our rope teams moving safely up and down the mountain. 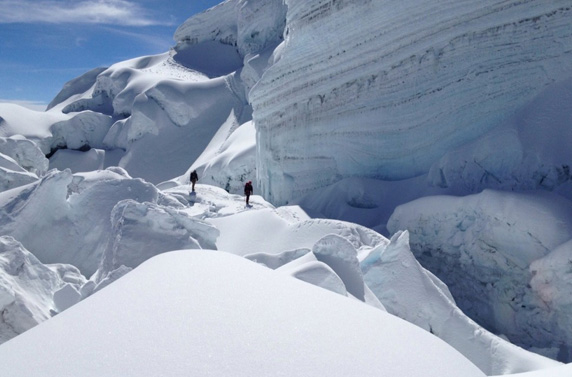 One of the tricker sections on Cotopaxi

There was a lot of steeper (40-45 degree) terrain above the seracs, and even a bit of short pitching to get around an even steeper shoulder, close to the top.  It was really cool to smell waves of sulfurous gas as we got closer to the summit, and looking out across the crater was spectacular! 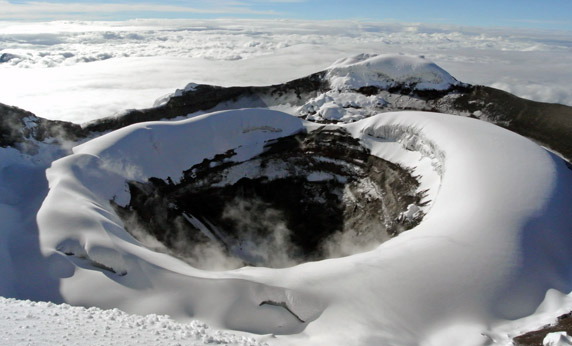 Looking across the steaming crater of Cotopaxi

We descended off the mountain and drove to the 300 year-old Hosteria La Cienega to rest and recover in it’s sumptuous colonial comfort.  There was some concern as to the condition of the route having been more challenging and perceived dangerous than our climbers had anticipated, so we spent a lot of time discussing the differences between “hazards,” “risks” and the perception of risk, based on an individual’s personal experience base.   After explaining how we, as professional guides, make decisions in the field, we decided that we would proceed with out plans to head to Chimborazo after a full rest day in the lower elevation, tropical vacation town of Banos. 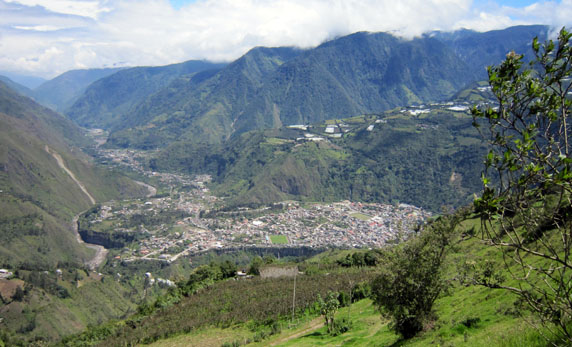 The town of Banos is at the foot of the Tungurahua volcano and home to loads of exciting activites like rafting, bungee-jumping, motorcycling, and jungle tours.

After spending a full day enjoying the warmth and activities of Banos, we loaded up in our trusty bus and made the drive to Riobamba, where we had lunch at a really nice restaurant before continuing on to our destination, the 20,703′ volcano, Chimborazo.  Stopping briefly at the lower of two refugios, we made the short hike up to the Whymper Hut, named after Edward Whymper, the prolific British first ascensionist of the late 1880’s.  The 19th was Nate Disser’s birthday.  Nate is the owner of Southwest Adventure Guides and organized of this expedition, and I managed to sneak a big chocolate cake up to the hut for a birthday surprise.  Trying to sleep by 5 pm, we arose at 10 pm and prepared for the ascent of the volcano. 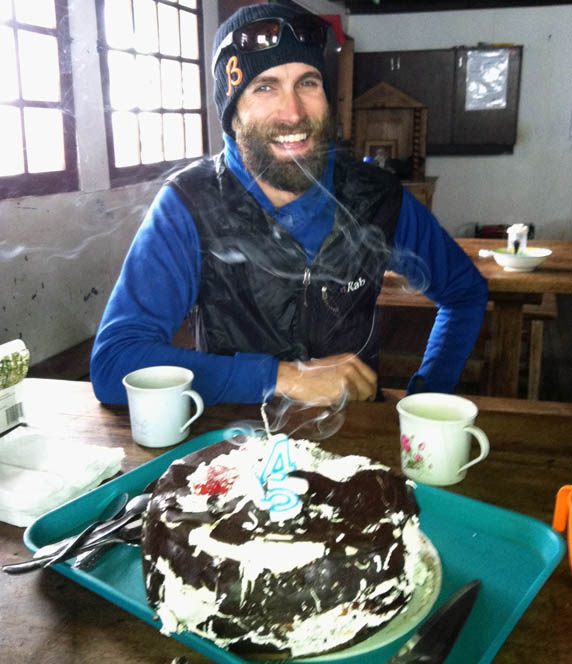 Happy birthday amigo! Nate runs Southwest Adventure Guides, with whom we collaborated on this trip. 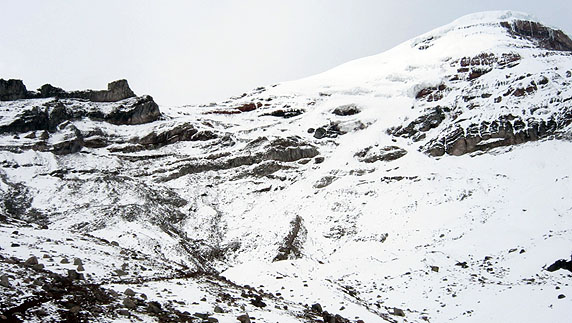 Looking up at Chimborazo from the Whymper Hut. The route ascends the scree from the bottom left and gains the skyline ridge just to the right of the large rock outcrops (Cerro Castillo). It then follows the skyline up for about 3000'.

Conditions on the route were good, in that there had been quite a bit of new snow, which mitigated much of the traditional rockfall hazard on the lower part of the climb.  As we got higher, the snow became breakable crust over 14″ of sugar, making for tough travel.  Higher still, the snow was knee deep, but the team kept pushing and made the summit just after sunrise. 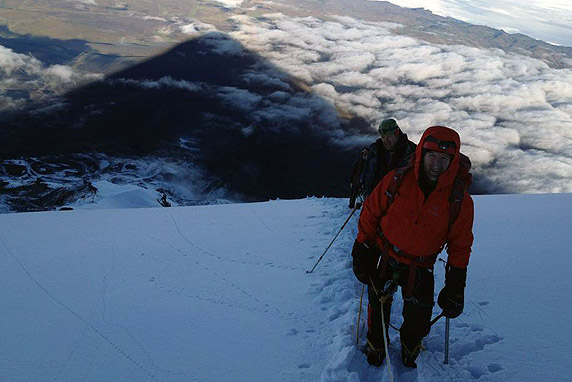 Volcanoes make the most impressive shadows! Near the top!

A treat was when our good friend and Mountain Trip guide, Pablo Puruncajas, summitted the mountain via a route called “El Directo” and embraced his father, Marcelo, whom we had employed as our in-country logistics coordinator and fellow guide.  Pablo then proceeded to ski the route he had climbed, making the first Ecuadorian descent of the big, bold line, which drops almost 4000′ down the big face.  In the photo below, Pablo is a mere speck on an immense landscape. 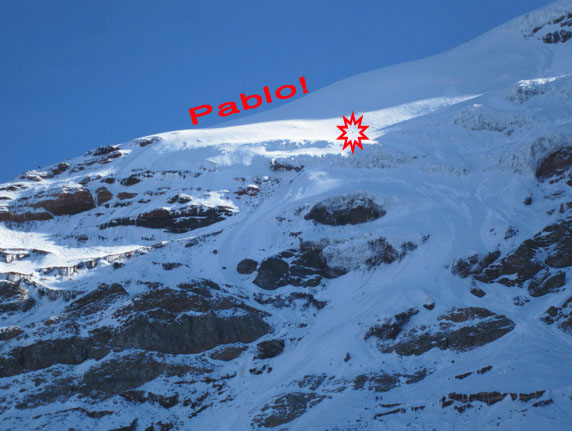 Photoshop helps you see Pablo on the huge route, which then drops skier's left past some steep terrain between seracs and then down the long runout in the center of the image.

After descending from the top, the team hiked back to the lower hut and made the trip back to our starting point of Quito for a wonderful dinner at a great restaurant that our friend Laurie (Lauriepedia!) found.  She had a great talent for finding good places to dine and recreate in whatever town we found ourselves!

It was a great trip and Mountain Trip will undoubtedly begin offering a version of this adventure in conjunction with our friends at Southwest Adventure Guides in the near future.  If you have any questions about what might be possible down in Ecuador, feel free to drop us a line and we’d love to chat.  There are many, many fun and engaging peaks in that small country, and a lifetime of adventures.