Eli Potter was able to send a photo from the lower part of the West Rib today, via his iPhone!  We have not heard of cellular data service available on the mountain until now, so this is exciting news!

The team is camped at 16,400′, resting up for a summit bid when the weather improves.  Eli called and we spoke for a while, during which time he provided some additional details about their climb.

The push up through the Northeast Fork was fairly epic, as it coincided with the day that the weather turned from cold and wintery to hot and summery!  They kept pushing, as they did not want to spend any additional time in the narrow valley, with rising temperatures.  Rising temperatures in the mountains can mean moving snow, not something you want to encounter in a skinny valley.

They arrived at their intended destination, camped up near the shelter of a rock buttress, close to the foot of the entrance snow gully, called “The Chicken Couloir.”  The next day, they started up the couloir, but warming temperatures made it an undesireable place to be, so they retreated after a short ways.  Not long after returning to camp, the clouds rolled in and dropped the temperature.  Inspired by the change in conditions, Eli made the decision to head up the couloir, so they packed up, roped in and started climbing.  The bergschrund was very challenging and took some time to negotiate, but the crew found near perfect snow conditions above and climbed up through the night.

Arriving at the top of the couloir, after 27 hours of climbing(!), they chopped a small ledge in the ice, next to a rocky outcrop, and rested for a few hours, all still tied into the rope and anchored to the rock.  When the sun warmed them, they shouldered their pack and climbed another few hours to a flat area where they made their first camp on the Rib proper.

The conditions the following day were near perfect, with easy cramponing and enjoyable climbing.  Yesterday, the snow rolled in and they found themselves post-holing in 2′ deep snow at times, which made for extremely taxing climbing.  All that work made today’s lounging at 16,400′ all the more sweet and enjoyable!

Below is a photo of Klara and Jay, with West Kahiltna Peak in the background, on the far side of the Northeast Fork of the Kahiltna. 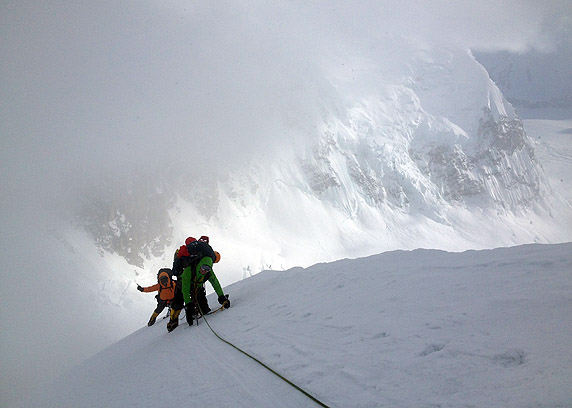