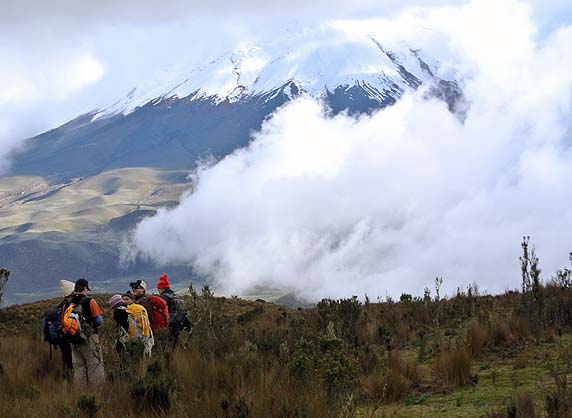 Ecuador is a wonderful country to visit, with a rich cultural history and diversity.  The geography is stunning and very complex for such a small country.  Beautiful beaches are lapped by waves to the west, with two chains of 400-600m peaks rising just a short distance from the tropical coast, separated by a north-south running central valley.  Continuing east, you’ll drop down into the Amazon Basin where the rainforest stretches far, far past the horizon.

Centuries ago, the indigenous people of this Andean regions were brought under the rule of the Inca, who used the common language of Quechua as one of their tools to coalesce their empire.  Local cultural groups were allowed to keep most of their local customs, and different groups are still easily distinguishable from one another by their traditional dress.  This gives Ecuador a much more culturally diverse feeling than many other countries in South America.

For climbers, Ecuador is a perfect destination.  Four tall, heavily glaciated volcanoes rise above 18,000 feet and a number of  other peaks top 17,000′.  The compactness of the country makes for easy access to great climbing!

On December 6th, a team of four climbers will join two Mountain Trip guides in the colonial city of Quito, the nation’s capital.   Let’s meet the team!

David and Matt Chamberlin are joining us from Colorado, USA

Scott Holder is joining us from California

Helmut Linzbichler is joining us from Austria

The guides for the team are Pablo Puruncajas and Sebastian Grau, both long-time members of the Mountain Trip family.

In fact, all the climbers, with the exception of Matt have climbed with us previously, so this trip has a very fun, family feel to it.  It’s been a lot of fun to work with this crew in the months leading up to this trip, and we’ll post updates on a regular basis as the team attempts to climb some of the Ecuadorian volcanoes.

The plan is to acclimatize on some lower peaks and then climb two of the tallest volcanoes, Cayambe (18,991′, 5790m) and Chimborazo (20,560′, 6310m).  After the second climb, one of the climbers will attempt Cotopaxi before boarding his flight home.

Please follow the team as they enjoy this fascinating equatorial country and climb some cool routes!