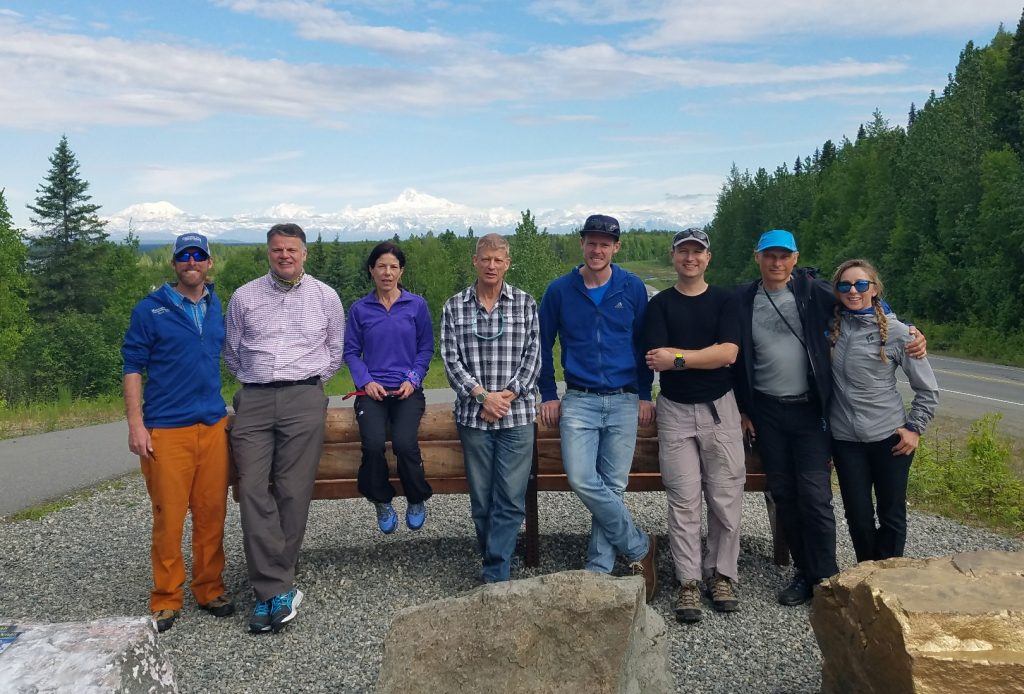 Our 2017 Denali season is in full swing, and so far two Mountain Trip teams have reached the summit and highest point in North America, after enduring some of the worst storm cycles the Alaska Range could dish out. These seemingly unending storms prevented many teams from moving up the mountain with high winds, snow, low visibility and sub-zero temperatures. But now, the storms have given way to sunshine and high pressure reigns again, bringing warmer temperatures and clear weather to the range. On Denali, it can be any season at any point in the year, a stark reality the June 2 team will likely become familiar with during their time on the mountain.

Denali, often called “The Great One,” or “The Roof of North America”, is often touted as the hardest of the Seven Summits, or highest peaks on each continent. Denali rises in stark contrast above the surrounding tundra, standing like an icy sentinel over south central Alaska, visible from over 100 miles away. The climbers will be taking the classic West Buttress Route to the summit, the route most commonly used by mountaineers from around the world for the past century, which gains over 13,000 vertical feet from Base Camp to the highly sought-after summit.  They will spend a maximum of around 21 days endeavoring towards the highest point in North America

The June 2 team has went through all of their preparations for the climb, including packing upwards of 20 pounds of their favorite snacks, all of their personal belongings and group gear, which will all serve to keep them entertained, well-fed and protected from the elements throughout their time on the mountain. They met their guides and other team members for the first time in Anchorage, Alaska a few days ago, where they went through a briefing on the mountain and the expedition, followed by an intensive gear check to insure that everyone’s gear is appropriate and sufficient for whatever conditions the mountain may throw at them.

The team then loaded into a Mountain Trip van full of all of their gear and made the beautiful drive North through several mountain ranges to the quaint, end-of-the-road town of Talkeetna, AK, the jumping off point for most expeditions into the Alaska Range. While spring is just beginning in Talkeetna and the lower reaches of Denali National Park, it is still winter on a moment’s notice in the Alaska Range; on the glacier, the team will not see a single plant (unless it is being cooked into their dinner) for the next 21 days. They will be in an otherworldly, ruggedly spectacular scene of flowing glaciers, deep blue crevasses, roaring avalanches and midnight sun.

The climbers enjoying their first of many meals together in Anchorage.

The June 2 Team comes to the glaciers and high peaks of Alaska from all around the world, from different countries and cultures; the joining of people on one mountain towards a common goal is always inspiring to see. Let’s meet the climbers!

María Paz Valenzuela, who has traveled from Santiago, Chile.
Martin Sailer, who joins us from Baden, Austria.
Mark Biegel, of the U.K.
Jonathon Lawrie, who has made the trip from Australia.
Matthew Foote, also joins the team from Australia.
Gidi Gottlieb, from Israel.

The team of climbers will be assisted by lead guide (and Mountain Trip co-owner) Bill Allen from Ophir, Colorado, guide Karl Welter of Telluride, Colorado (on his second trip of the season) and guide Erin Laine who travels frequently for guiding, but would likely consider either Colorado or Idaho home.

This highly diverse and international group of climbers will become a team over the next 21 days on the mountain. They have already received their mandatory orientation from the Park Service Climbing Rangers, and are slated to fly onto the glacier with our friends at Talkeetna Air Taxi as soon as the weather allows.

We would like to remind those at home that while we will do the best we can to post updates on the team every day, there might be a few lapses in communication. Although satellite phones are often great forms of communication, they sometimes experience difficulties above 14,000′ deep in the rugged Alaska Range. Please keep in mind the old adage “no news is good news,” and don’t be too alarmed if one, two or even three days pass without an audio update from the team.

For family members and friends at home who are following along at home, you are welcome and encouraged to post comments to your loved ones on the team, just know that they have no way of reading them until after they return to the non-glaciated world and relative civilization of Talkeetna.

Best of luck to the June 2 Team! The next update we post for them will come in audio form, likely from Denali Base Camp at 7,200′ on the Kahiltna Glacier.