The team made it to Base Camp today!  The weather did not look super promising earlier in the day, but as the afternoon approached, the clouds parted and they took advantage of a brief window in the rainy Talkeetna weather to fly to the Southeast Fork of the Kahiltna Glacier.

Climbers come to Alaska from all parts of the world to attempt the tallest peak in Alaska.  Denali, at 20,310 feet, is one of the Seven Summits, the highest peak on each continent.  Mountain Trip is one of only a few guide services permitted by our National Park Service to lead climbers up the mountain, a distinction we’ve had since the Park began permitting under a concession system in 1981. 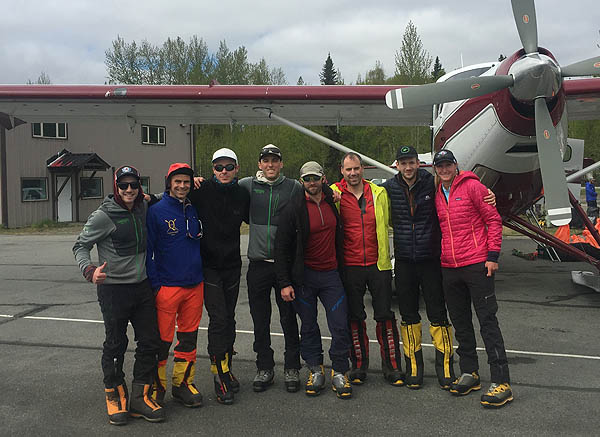 Joining us on our May 13 West Buttress Team are:

The Mountain Trip guides for the expedition are:

The team started the day in Anchorage, where they departed early in the morning.  After a brief stop in the growing town of Wasilla (nope – they could not see Russia from Wasilla – probably due to the rain?), they continued another hour to the end of the road – Talkeetna.  The National Park Service requires that any climber headed in to attempt Denali partake in an orientation provided by NPS Climbing Rangers.  Our team completed the briefing and then headed over to the airstrip.

At the strip, they weighed their gear and supplies in preparation for flying and then watched the rain fall.  Things were not looking too good for a flight, but after a bit, our friends at Talkeetna Air Taxi gave them the call to rally to the planes for flights into the Alaska Range!

Over the coming weeks, we will keep you posted as the team works its way up the mountain.  They will call in updates on a regular basis, but please understand that making a satellite call from the far north, in a mountainous environment, is not always possible.  We encourage you to append your comments to the team’s dispatch pages, as the climbers will love to read your thoughts after they get off the mountain.