Lead guide Sebastian Grau called in from the Southeast Fork of the Kahiltna Glacier with introductions for our June 17 West Buttress team.

Denali is an iconic mountain for anyone with a love of wild places and the classic West Buttress route attracts mountaineers from around the globe.  This team emblematic of the international appeal of Mount McKinley.  We have climbers from four continents represented on this team!

The team met in Anchorage at the very nice Millennium Alaska Hotel on the 17th.  The guides conducted a team meeting in which they covered a variety of topics related to the expedition and then helped each climber with a final equipment check before packing up their bags in anticipation of their flight to the glacier.  Some time was spent packing snack food for the mountain, and our guides helped each climber pack sufficient, yet not too much food for their lunch/snack bags. 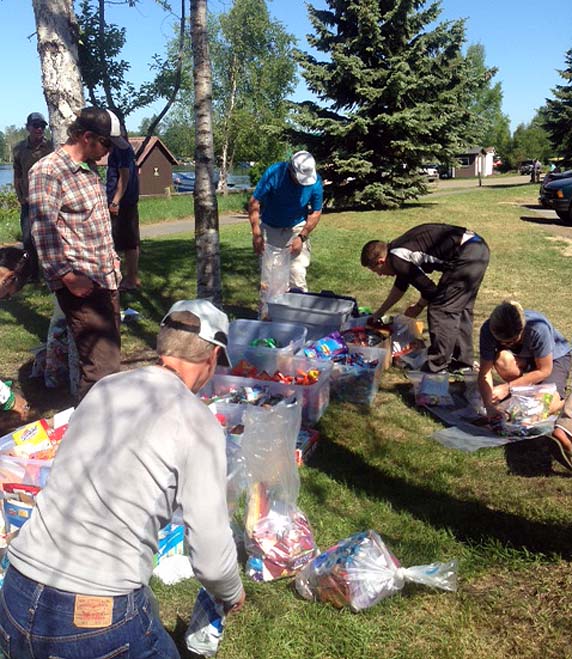 The June 17 Team packing lunch and snack food outside the Millennium Alaska Hotel, on the shore of Lake Spenard, which bustles with float planes landing and taking off!

Yesterday morning, we drove the team up to the small town of Talkeetna, Alaska, where they were treated to another orientation about climbing Denali, this time by Rangers of the National Park Service.  Afterwards, they made their way over to the local airstrip and finished their preparations for flying into the Alaska Range with our good friends at Talkeetna Air Taxi. 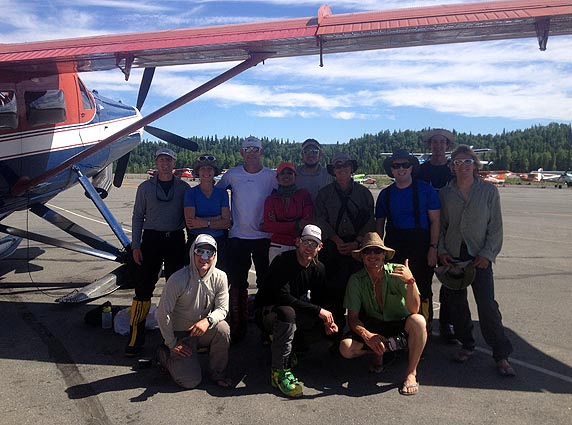 The team, almost ready for the glacier. Guide Jim Toman is not quite sporting proper glacier footwear!

Yesterday afternoon, the team flew into the Alaska Range in ski-equipped airplanes.  It was a spectacular day for flying, as the Range was crystal clear.  This is one of the more memorable flights you can take anywhere, as you start over the lush green of Talkeetna, pass over dozens of lakes and a couple of huge, raging rivers before the landscape rises up as if to meet the plane.  The mountains of the Alaska Range start relatively small with the Dutch Hills, but soon tower over the plane.  Glaciers, rock and snow dominate the landscape, and eyebrows raise as the plane passes through a narrow gap in a craggy mountain called One Shot Pass.  Yep- you only get one shot to make it through!!  (Don’t worry- it’s bigger than it feels!)

Skis down, the plane came to a bouncing landing on the airstrip known as Kahiltna International Airport, on the Southeast Fork of the massive Kahiltna Glacier.  Glaciers are somewhat like frozen rivers, with smaller tributary glaciers feeding into the main flow, and the SEF is one such feeder of the Kahiltna.

The team unloaded and set up camp for the evening.  The plan is to review some skills before heading up the glacier to the first of 4-5 camps that they will use to climb towards the 20,320′ (6194m) summit of Denali over the next couple of weeks.  Please check back as we will post regular updates form the team.