It was a real pleasure to participate in the launch of the first of two teams from the United Arab Emirates Presidential Guard, as they headed up the Kahiltna Glacier onto the flanks of Denali.  We are assisting 20 climbers from the Emirates, as they continue their quest to climb Mount Everest in an ongoing effort to promote healthy, outdoor lifestyles for the citizens of their country.

The climbers have been training for this expedition for months, receiving instruction in Switzerland, Norway and at the USMC Arctic Warfare Center in Nevada.  That preparation yielded 20 hand picked members of their company, who were ready for the rigors and demands of climbing to altitude in Alaska.  The commander of the Presidential Guard, Major General Mike Hindmarsh and one of his senior Non Commissioned Officers, PG. Command Sargent Ibrahim Al Bastaki, flew over with the first 10 climbers to participate in the launch of the expedition.  I was fortunate to be able to join these two gentleman in the company of one of our assistant guides, Alison Hancock and the first group of UAE climbers on the hike up the Kahiltna Glacier to Camp 1 at 7,800′ (2377m). 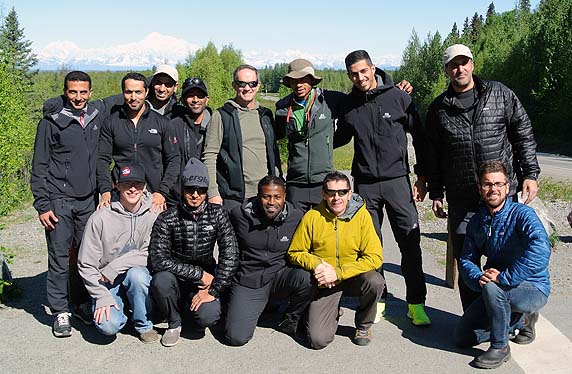 The team overlooking Talkeetna, AK and the Alaska Range, before flying to the glacier.

We spent much of the team;s first day finalizing their equipment and reviewing the plan for the coming days.  On the morning of their second day in Alaska, we loaded up in our Mountain Trip vans and drove up to Talkeetna, where the team attended an orientation from our National Park Service outlining specific things that all climbers must understand to both protect themselves and the resources of the Park.  The day was clear and we were treated to a brilliant view of the Alaska Range as we approached Talkeetna.  The team enjoyed the opportunity to take photos of the mountains. 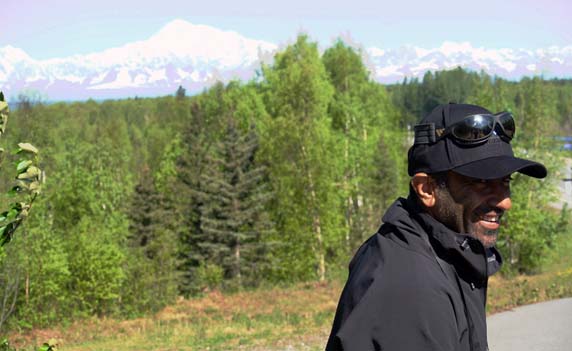 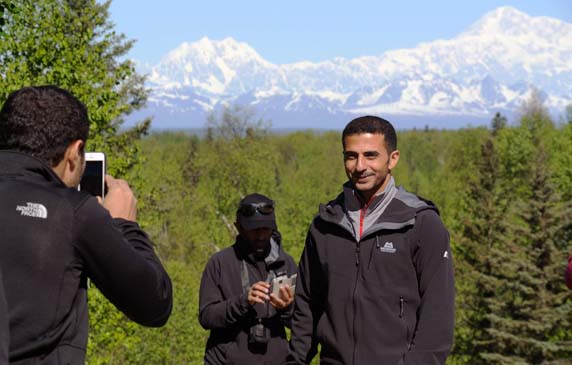 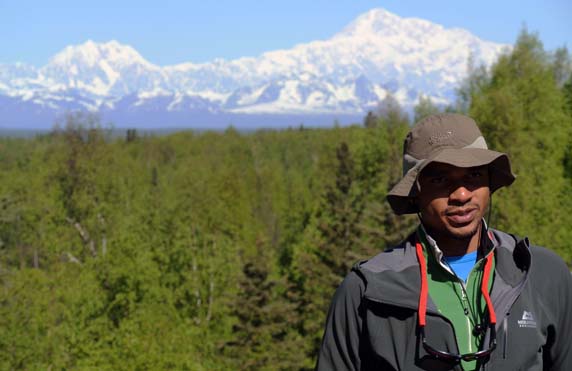 It is always a rewarding experience to see the faces of climbers when they gaze upon the Alaska Range for the first time.  These guys live in such a very, very different environment that it was especially neat to see the awe and excitement in their eyes!

With all of our pre-trip administrative work completed, we boarded three aircraft and flew to the glacier.  Our good friends and partners at Talkeetna Air Taxi gave the General, Ibrahim, Ali and me an amazing flight up the Ruth Glacier and around Mount Huntington and Hunter on our way into Base Camp. 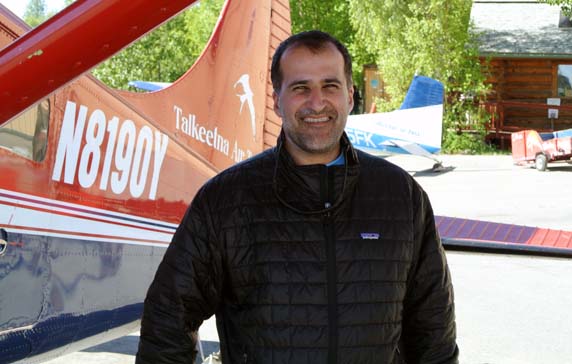 Ibrahim, ready and excited for the flight. 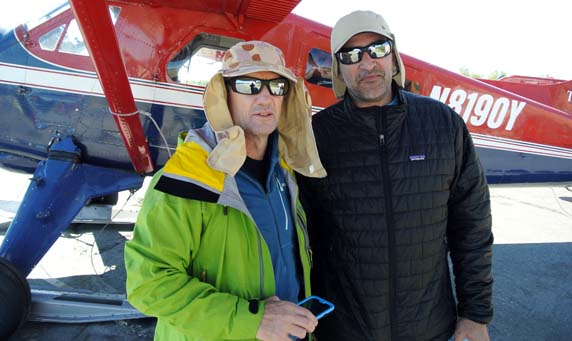 MG Hindmarsh and PG. Command S.M. Al Bastaki, about to board the De Haviland Beaver that flew us into the Range. 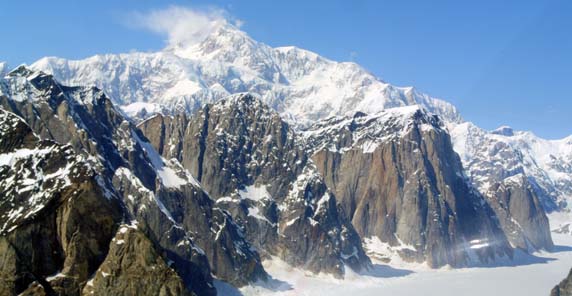 We flew right up the Ruth Glacier, into the Ruth Gorge. The Ruth Gorge has some of the highest big wall climbs on the planet. If the ice were to melt, this would be twice as deep as the Grand Canyon!

After unloading the planes at the Southeast Fork of the Kahiltna Glacier, we spent the afternoon reviewing skills that the team would employ on our hike to Camp 1.  The evening continued to be crystal clear and we had a wonderful view of Denali from BC. 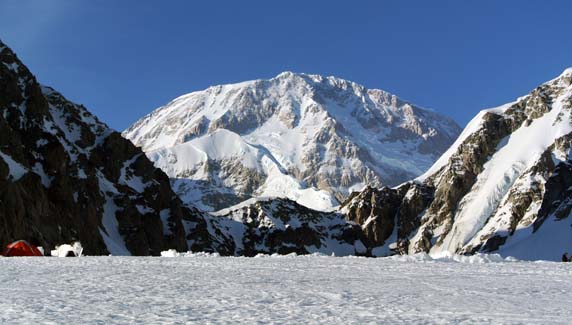 We awoke fairly early and broke down our tents in preparation for our hike up the Kahiltna Glacier.  We took our time, as it was a cold morning and the glacier was very, very firm.  When we departed, it was still chilly and we had a relatively easy day of moving up glacier.  This first day is something of a long grind, and it can really beat people up.  The team did well and made it to Camp 1 in a good time. 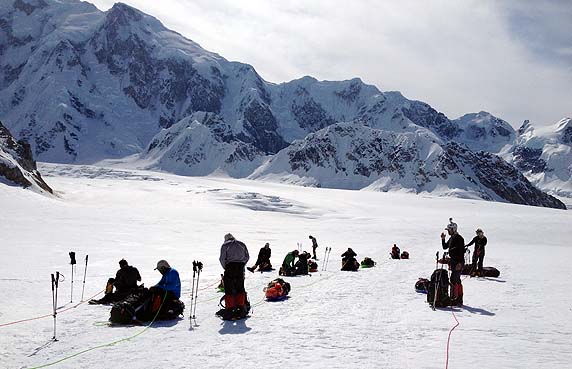 Camp 1 is situated at 7,800′ on the main body of the massive Kahiltna Glacier.  We had passed a number of other teams camped on a section of glacier that seemed to us to be riddled with crevasses, so we continued on another kilometer to the base of a long hill known as Ski Hill.  The glacier drops down Ski Hill and compresses at the bottom, which makes for a decreased likelihood of being crevassed.  Glaciers are like rivers of ice, constantly flowing downhill.  Crevasses often happen as would rapids or waves on a river, where the water (and ice) picks up speed to the point where the otherwise smooth surface splits apart.

We experienced that geology in action at 02:00 (am) on our first night at Camp 1.  Several of our team felt a thump or hard vibration, which we learned after inspection was the birth of a crevasse, right under some of our tents!  In all my years of camping and climbing on glaciers, this was the first time I ever experienced such a phenomena.  A small, 2 cm wide crack snaked right under my tent.  We probed the outside margins of the crevasse and found it to be no more than 6 inches wide and collectively guessed that the stored energy that had caused it to develop had been released, so there was little probability of it growing.  It is common to see narrow, parallel sided cracks like this, with well-defined margins, but none of us had ever been present at such a crack’s inception. It was really a wild experience!!

The plan had been to carry loads up the Kahiltna to around 10,000′ (3048m), but a strong wind formed during the night, resulting in whiteout conditions on our first morning at Camp 1.  We readied ourselves in case the wind slackened, but it never did, although the skies cleared somewhat to our south.  We spent some time reviewing skills that afternoon, including crevasse rescue and how to belay rope teams into and out of so-called “safe zones.”  It ended up being a productive day, in spite of the high wind and cold temperatures.

That day was my eldest son’s birthday, and the team sang him a traditional Arabic birthday song, as we celebrated with him in abstentia.  Spending time with a group of people from such a different culture from my own was a true highlight of this experience for me, personally.  Despite our language and cultural differences, we bonded together as a team very quickly, and shared stories of our lives with each other, as well as photos from our respective homes.  It was genuinely a wonderful time spent with a group of new friends.

The next morning, the climbing team loaded up their sleds and packs to ferry a load up to their next camp, while Major General Hindmarsh, Ibrahim, Ali and I loaded up for our return to Base Camp.  The General gave his men a very inspiring talk prior to his departure (some of which I am going to borrow for helping prepare our climbers!).  It was great to see the admiration that is men had for him, as they jockeyed to get their pictures taken with him on the glacier. 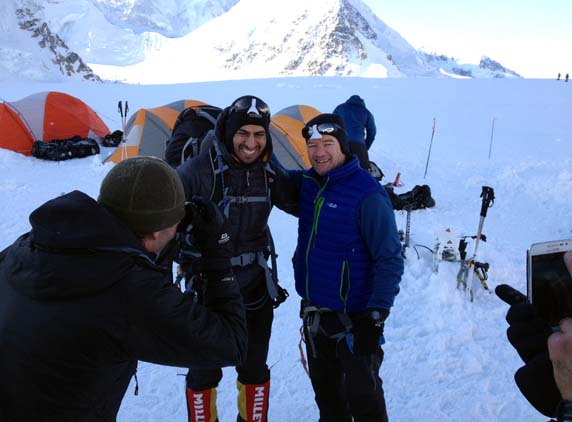 Watching the climbing team head up Ski Hill, each of us wished we were going with them, but we had to make it back to Base Camp in order to meet the second group of UAE Presidential Guard climbers, so we roped up and headed back down glacier.  Conditions were absolutely perfect for traveling.  It never got HOT, yet it was warm enough to travel in light layers.  The snow on the surface was very firm, making the hike very pleasant.  After a few hours, we rolled into camp, and were quickly whisked back to Talkeetna by TAT, arriving in time for the General to greet his next team. 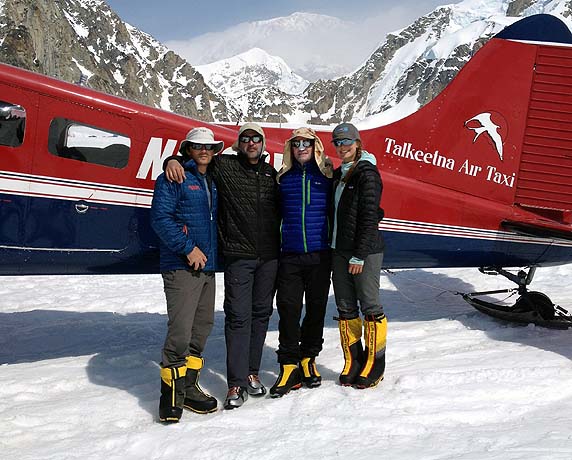 I’d like to thank the members of the Presidential Guard who chose to trust Mountain Trip with helping their team on this step of their journey.  I feel like I made some wonderful new friends and look forward to joining them in their part of the world someday soon.  Inshallah!